Laundry Detergent For $2 Per Year! 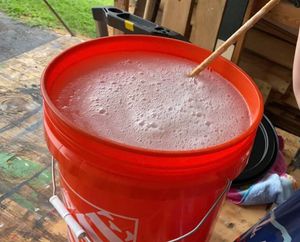 Today, we started a little homestead project that I’ve been wanting to try for years. Homemade Laundry Detergent!

Let’s face it. Laundry Detergent is dadgum expensive! $10-15 for a gallon of some chemical-packed, perfume-laden slime in a fancy bottle and a billion dollars worth of advertising behind it. If you’re like me, then you’ve been thinking that there has GOT to be a better way to wash clothes.

I Know what you’re thinking. And I’ve thought it too. “If the homemade stuff is just as good and so much cheaper, then then everyone would be doing it.” And you may be right. I don’t know yet.

I’ve already read tons of online research and opinion, and frankly, I’m not so convinced yet, one way or the other. The naysayers claim that the soap-based detergent we make at home only “moves the dirt around” instead of actually cleaning the clothes and isolating it. That sounds logically possible, but I don’t know if that’s just The Big Inc trying to throw us off course.

Nevertheless, we’re determined to try a batch of Homestead Detergent and see for ourselves. So off to the store I went. 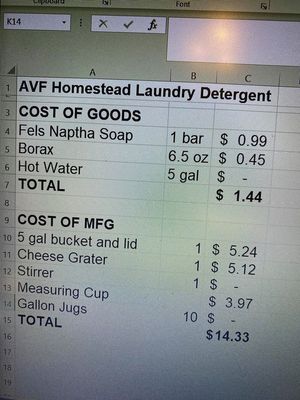 I’ve got a list of expenses so we can really keep track of things. There will be the cost of goods, which relates to what it actually costs (ongoing) to make a batch. Then there’s the cost of manufacturing, or what it costs to get the stuff it takes to turn the materials into detergent. Things like buckets and cheese graters, that we’ll use over and over. You can see what we spent to get going today.

As you can see, we spent almost $15 on manufacturing. That will last us…forever. But even if it didn’t, this batch of detergent makes 10 gallons, so that’s $1.43 per gallon.

We’ll be putting ours in gallon jugs though. That’s 128 oz. So hold on to your math hat. We’ll have to break it all down into cost per ounce to really compare.

To further drive the point home, that means the average family spends about $300/year on laundry detergent. That's roughly 2,500 ounces of detergent per year. But 2,500 ounces of our Homestead Detergent would only cost them $2.50. A year!

Wow! What a difference. So you decide if it’s worth it to pay 120 times as much for the store-bought stuff. It’s going to take some mighty high convincing to sell me on it.

Be sure to join us so you can see when we post our actual wash test, and a link to our video and the recipe of how to make this. We have no idea how the test will turn out, but we can’t wait to see!

To get our recipe for how to make your own Homemade Laundry Detergent, go to https://applevalleyfarmga.com/avf-blog/blog/avf-homemade-laundry-detergent-recipe

In the meanwhile, please head over to our YouTube channel where you can watch all sorts of woodworking and homesteading videos. And definitely SUBSCRIBE while your there!

Thank you, and have a blessed day!